Comparison on fixation benefit given by 6th CPC & recommended by 7th CPC – IRTSA
COMMON MULTIPLE FACTOR NEEDS TO BE HIKED
At present, without implementing 7th pay commission recommendations, year on year increase in the expenditure in both pay and pension has averaged about 11%. Thus real increase on account of increase in pay, all allowances & pension will be only 12.55% (23.55% – 11% = 12.55%). Real increase on account of Pay & DA will be only 5% (16% – 11% = 5%). It is clearly evident that financial implications will be very marginal on account of implementation of 7th CPC recommendations. In the scenario of increase in Government revenue every year and reduction in staff strength of every year, pay element in Government expenditure will come down every year with respect to revenue earning or GDP. 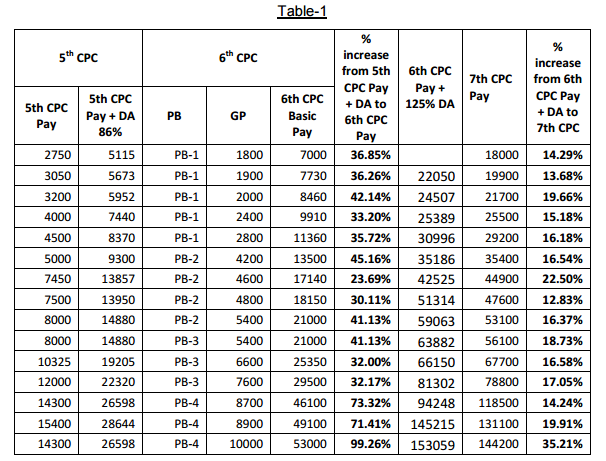 The Multiple Factor of 2.57 proposed by the Pay Commission for Pay Fixation is totally unjust, inadequate and arbitrary and – keeping in view the high inflation (in real terms and wage rise in the organized sector including the PSUs in the two revisions in PSUs since the Sixth CPC. The Fixation Benefit needs to be at least 40% – as after the last two Pay Commissions and the Common Multiple Factor may please be fixed at least (Pay+DA) + 40% of Pay + DA, ie. 3.15 times of 6th CPC basic pay.

Proposed entry pay as per table explained above (figures rounded off to next 100). Enhancement given to levels in PB-2 as recommended by 7th CPC as per Job requirement, responsibilities and accountability: 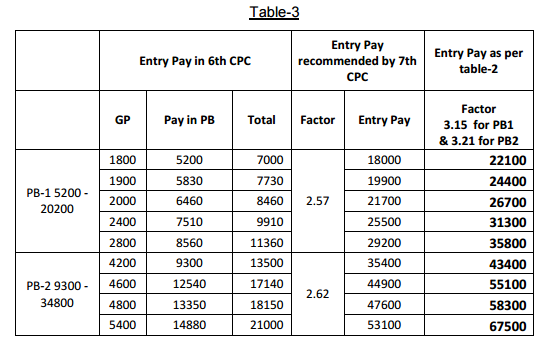 Chaturvedi, a 1987 batch IAS officer of Madhya Pradesh cadre, has been appointed to the post under Department of Expenditure in the Finance Ministry.
He is presently working as Resident Commissioner in Madhya Pradesh Bhawan, New Delhi.
Chaturvedi will hold the charge for five years as Joint Secretary in Finance Ministry but one year in Seventh Pay Commission implementation cell, an order issued by Department of Personnel and Training said.
The Cell is processing to implement the “accepted recommendations of the Seventh Pay Commission”,
Besides Joint Secretary, the Cell have nine officials and staff, including a Director level officer and two under-secretary level officers.
The recommendations of the Seventh Pay Commission that will benefit 47 lakh central government employees and 52 lakh pensioners, which will impact the Central Budget by Rs 73,650 crore and the Railway Budget by Rs 28,450 crore.
The 900-page report of the Seventh Pay Commission headed by Justice A K Mathur was presented to Finance Minister Arun Jaitley on November 19 with a recommendation that the new scales be implemented from January 1 next year.
The panel recommended a 14.27 per cent increase in basic pay, the lowest in 70 years. The previous 6th Pay Commission had recommended a 20 per cent hike which the government doubled while implementing it in 2008.
The 23.55 per cent increase includes hike in allowances.
The minimum pay has been recommended to be raised to Rs 18,000 per month from current Rs 7,000 while the maximum pay, drawn by the Cabinet Secretary, has been fixed at Rs 2.5 lakh per month from current Rs 90,000. For the Secretaries it has been fixed at Rs 2.25 lakh as against Rs 80,000 currently.
In a significant recommendation, the report favoured introduction of a health insurance insurance scheme for staff and pensioners and doubling the gratuity ceiling to Rs 20 lakh.
The Centre has expressed confidence that the implementation of the recommendation will not lead to a breach in the fiscal deficit targets.
Minister of State for Finance Jayant Sinha had said: “We are confident that we will be able to stick to fiscal consolidation roadmap even with what the Pay Commission recommended. The roadmap that we have put together is taking into account what the impact of the Pay Commission would be”.