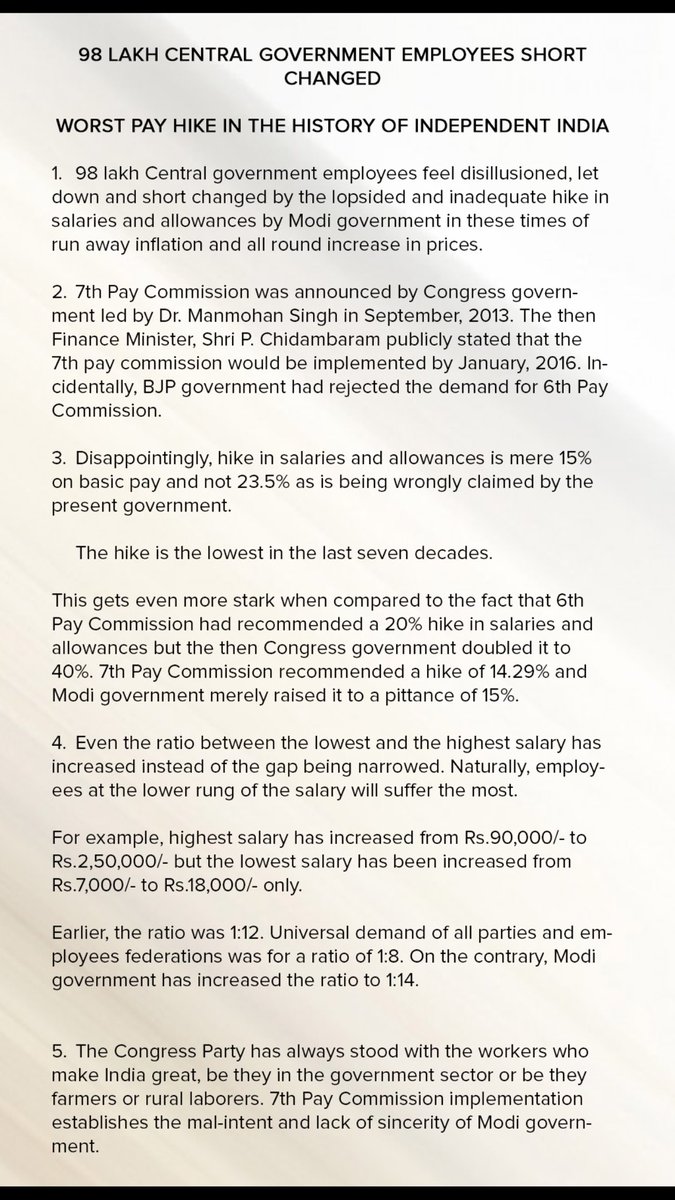 RMS,Circleoffice & SBCO  cadre restructuring  has been processed on the line of Postal Group-C . Now file is with JS&FA for further approval.

MMS Cadre restructuring file is with JS &FA for approval.


FNPO Thank our Secretary Posts for his sincere efforts and keeping his promise.
30/06/2016
we should go ahead with our preparations

As all of you are aware that the Union Cabinet has accepted the report of the VII CPC today.
It has been noticed that there is no improvement in Minimum Wage and Multiplying Factor as well, which was our hard pressed demand. Instead, wages, as recommended by the VII CPC have been accepted as it is, which is highly disappointing. Only two committees have been formed, one to take care of the allowances and another for National Pension Scheme, which will submit their reports within four months time.
It is quite unfortunate that, our demand for improvement in the report of the VII CPC has not been considered by the government.
Therefore, it would be quite appropriate that, we should go ahead with our preparations for “Indefinite Strike”, slated to be commended from 06:00 hrs. on 11th July, 2016.
You are also advised -to intensify the mass mobilization.
With fraternal greetings!
Yours faithfully

The Union Cabinet chaired by the Prime Minister Shri Narendra Modi has approved the implementation of the recommendations of 7th Central Pay Commission (CPC) on pay and pensionary benefits.   It will come into effect from 01.01.2016.I

The Cabinet has also decided that arrears of pay and pensionary benefits will be paid during the current financial year (2016-17) itself, unlike in the past when parts of arrears were paid in the next financial year.
The recommendations will benefit over 1 crore employees. This includes over 47 lakh central government employees and 53 lakh pensioners, of which 14 lakh employees and 18 lakh pensioners are from the defence forces.

1.            The present system of Pay Bands and Grade Pay has been dispensed with and a new Pay Matrix as recommended by the Commission has been approved. The status of the employee, hitherto determined by grade pay, will now be determined by the level in the Pay Matrix. Separate Pay Matrices have been drawn up for Civilians, Defence Personnel and for Military Nursing Service. The principle and rationale behind these matrices are the same.

2.            All existing levels have been subsumed in the new structure; no new levels have been introduced nor has any level been dispensed with. Index of Rationalisation has been approved for arriving at minimum pay in each Level of the Pay Matrix depending upon the increasing role, responsibility and accountability at each step in the hierarchy.

3.            The minimum pay has been increased from Rs.  7000 to 18000 p.m.  Starting salary of a newly recruited employee at lowest level will now beRs.  18000 whereas for a freshly recruited Class I officer, it will be Rs. 56100.  This reflects a compression ratio of 1:3.12 signifying that pay of a Class I officer on direct recruitment will be three times the pay of an entrant at lowest level.

5.            Rate of increment has been retained at 3 %. This will benefit the employees in future on account of higher basic pay as the annual increments that they earn in future will be 2.57 times than at present.

6.            The Cabinet approved further improvements in the Defence Pay Matrix by enhancing Index of Rationalisation for Level 13A (Brigadier) and providing for additional stages in Level 12A (Lieutenant Colonel), 13 (Colonel) and 13A (Brigadier) in order to bring parity with Combined Armed Police Forces (CAPF) counterparts at the maximum of the respective Levels.

7.            Some other decisions impacting the employees including Defence & Combined Armed Police Forces (CAPF) personnel include :

8.            The Cabinet also approved the recommendation of the Commission to enhance the ceiling of House Building Advance from Rs.  7.50 lakh to 25 lakh. In order to ensure that no hardship is caused to employees, four interest free advances namely Advances for Medical Treatment, TA on tour/transfer, TA for family of deceased employees and LTC have been retained. All other interest free advances have been abolished.

9.            The Cabinet also decided not to accept the steep hike in monthly contribution towards Central Government Employees Group Insurance Scheme (CGEGIS) recommended by the Commission. The existing rates of monthly contribution will continue. This will increase the take home salary of employees at lower levels by Rs. 1470. However, considering the need for social security of employees, the Cabinet has asked Ministry of Finance to work out a customized group insurance scheme for Central Government Employees with low premium and high risk cover.

10.        The general recommendations of the Commission on pension and related benefits have been approved by the Cabinet. Both the options recommended by the Commission as regards pension revision have been accepted subject to feasibility of their implementation. Revision of pension using the second option based on fitment factor of 2.57 shall be implemented immediately. A Committee is being constituted to address the implementation issues anticipated in the first formulation. The first formulation may be made applicable if its implementation is found feasible after examination by proposed Committee which is to submit its Report within 4 months.

11.        The Commission examined a total of 196 existing Allowances and, by way of rationalization, recommended abolition of 51 Allowances and subsuming of 37 Allowances. Given the significant changes in the existing provisions for Allowances which may have wide ranging implications, the Cabinet decided to constitute a Committee headed by Finance Secretary for further examination of the recommendations of 7th CPC on Allowances.  The Committee will complete its work in a time bound manner and submit its reports within a period of 4 months. Till a final decision, all existing Allowances will continue to be paid at the existing rates.

12.        The Cabinet also decided to constitute two separate Committees (i) to suggest measures for streamlining the implementation of National Pension System (NPS) and (ii) to look into anomalies likely to arise out of implementation of the Commission’s Report.

13.        Apart from the pay, pension and other recommendations approved by the Cabinet, it was decided that the concerned Ministries may examine the issues that are administrative in nature, individual post/ cadre specific and issues in which the Commission has not been able to arrive at a consensus.

7th CPC – GOVERNMENT REJECTED ALL THE MODIFICATIONS SOUGHT BY THE NJCA

NO INCREASE IN MINIMUM PAY AND FITMENT FORMULA

HOLD PROTEST DEMONSTRATIONS & RALLY IN FRONT OF ALL OFFICES
NJCA will meet at 04:00 PM on 30th June 2016 to decide future course of action. Continue in full swing mobilization for indefinite strike from 11th July 2016.
S.G.FNPO.

The upcoming launch of India Post Payments Bank-views of our Fedration.
﻿click the above link to read more.
28/06/2016
If not now then when?
Our strike date is July11﻿Click the link to read our demands

Promotion and posting in the grade of Member, Postal Services Board, Indian Postal Service, Group 'A'
Click Here to view the order. 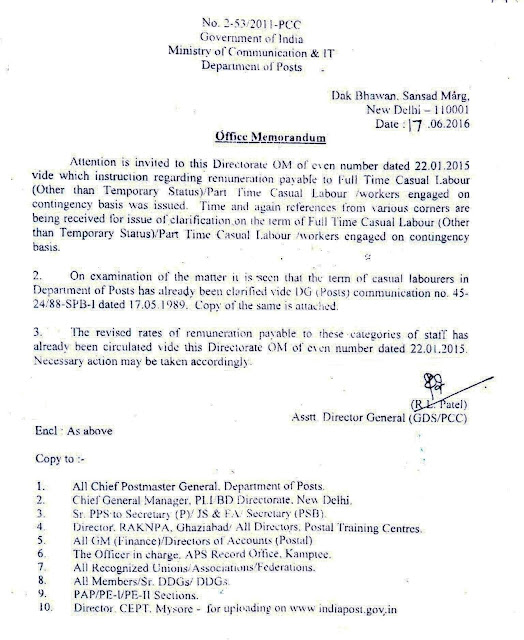 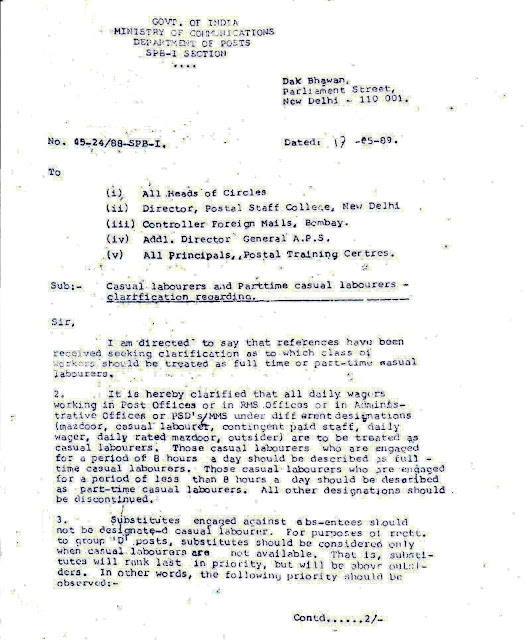 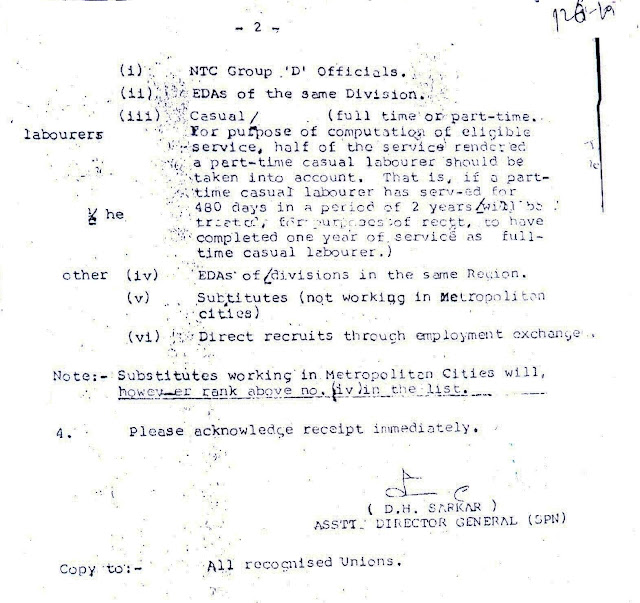 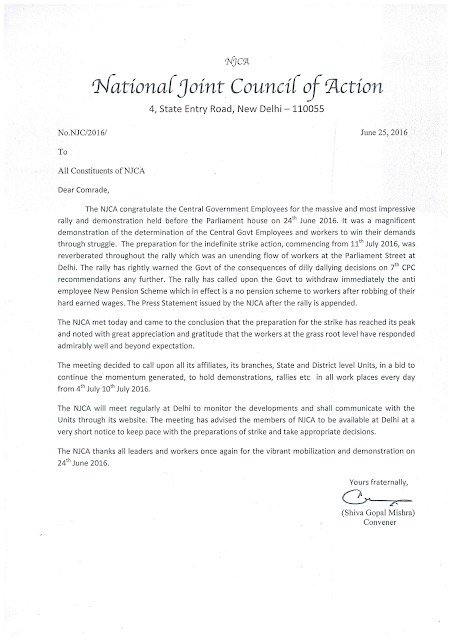 NJCA Rally rightly warned Govt of Consequences if 7th CPC delayed further.
The NJCA congratulate the Central Government Employees for the massive and most impressive  rally and demonstration held before the Parliament house on 24th June 2016. It was a magnificent demonstration of the determination of the Central Govt Employees and workers to win their demands through struggle. The preparation for the indefinite strike action, commencing from 11 th July 2016, was reverberated throughout the rally which was an unending flow of workers at the parliament Street at Delhi. The rally has rightly warned the Govt of the consequences of dilly dallying decisions on 7th CPC recommendations any further. The rally has called upon the Govt to withdraw immediately the anti employee New Pension Scheme which in effect is a no pension scheme to workers after robbing of their hard earned wages. The Press Statement issued by the MCA after the rally is appended.
The NJCA met today and came to the conclusion that the preparation for the strike has reached its peak and noted with great appreciation and gratitude that the workers at the grass root level have responded admirably well and beyond expectation.
The meeting decided to call upon all its affiliates, its branches, State and District Level Units, in a bid to continue the momentum generated, to hold demonstrations, rallies etc in a I work places every day from July 10th July 2016.
The NJCA will meet regularly at Delhi to monitor the developments and shall communicate with the Units through its website. The meeting has advised the members of NJCA to be available at Delhi at a very short notice to keep pace with the preparations of strike and take appropriate decisions.
The NJCA thanks all leaders and workers once again for the vibrant mobilization and demonstration on 24th June 2016.

Sub:- Recovery of wrongful/excess payments made to Government servants.

The issue of recovery of wrongful/excess payments made to Government servants has been circulated by DOP&T vide their 0.M.No.18/26/2011-Estt (Pay-I) dated 6th February, 2014 wherein certain conditions were stipulated to deal with the issue. Further, DOP&T vide their 0.M No 18/03/2015-Estt , (Pay-I)dated 2nd March, 2016, in consultation with Ministry of Finance (Department of Expenditure) and the Department of Legal Affairs has enumerated certain situations wherein recovery by the employee would be impermissible in law. A copy each of these instructions is sent herewith for information/guidance. These will apply mutatis-mutandis to Railway employees also.

2. The date of applicability of these orders would be the date of issue of DOP&T’s letters.