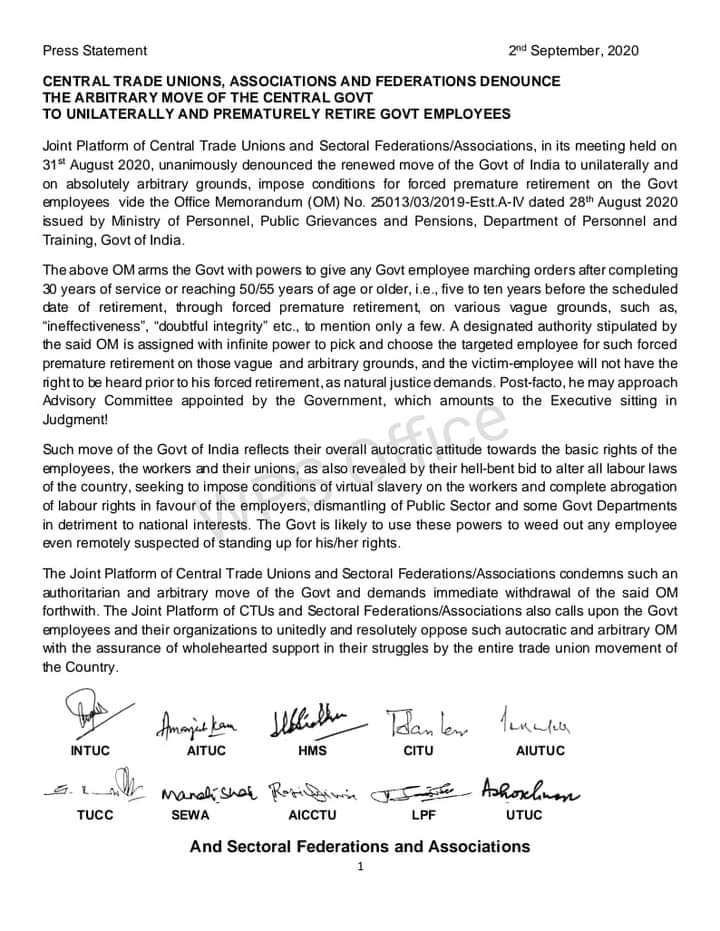 Unions fear the order issued by Ministry of Personnel on August 26 will give departments power to ‘pick and choose’ employees who speak for their rights.

New Delhi: A collective of central trade unions, associations and federations have come down heavily on the Central government’s move to “unilaterally and prematurely” retire government employees.

The Joint Platform of Central Trade Unions and Sectoral Federations/Associations has accused the centre of making a provision through an office memorandum issued by the Department of Personnel and Training for removal of employees from service on the ground of their being “ineffective” or if their “integrity is doubtful”.

In a meeting on August 31, 2020, the collective unanimously denounced the move of the Central government to “unilaterally and on absolutely arbitrary grounds, impose conditions for forced premature retirement of the government employees.” The signatories to the statement included trade bodies like INTUC, AITUC, HMS, CITU, AIUTUC, TUCC, SEWA, AICCTU, LPF and UTUC.

The order issued by the Ministry of Personnel, Public Grievances and Pensions on August 28, has armed the government with the power to give any government employee marching orders as they complete 30 years of service or reach 50-55 years of age or more – which is five to 10 years before the scheduled age of retirement – the workers groups said.

They alleged that the order also provided for removal from service through forced premature retirement on various vague grounds such as ineffectiveness or doubtful integrity.

The Joint Platform added that a designated authority stipulated by the office memorandum has been assigned with infinite power to pick and choose a targeted employee for such forced premature retirement on vague grounds. The employee will not even have the right to be heard before the forced retirement, as natural justice demands.

Post facto, the statement said, such a ‘victim-employee’ may approach the advisory committee, which too would be appointed by the government. However, this would mean that the executive would be judging an issue dealt by it.

Therefore, the Joint Platform said, this move reflects the overall autocratic attitude towards the basic rights of employees, workers and their unions. Also, it said, this move has revealed that the Centre was bent upon altering all labour laws of the country and seeking to impose conditions of virtual slavery on the workers.

Stating that the Centre was likely to use these powers to weed out any employee even remotely suspected of standing up for his or her rights, the Joint Platform said it denounces such an authoritarian move.

What the office memorandum said

The Ministry of Personnel, Public Grievances and Pension had stated that through the office memorandum, all the departments had been asked to review the service records of employees who have completed 30 years and identify inefficient or corrupt staff and retire them prematurely in public interest.

The review was provided under Fundamental Rule (FR) 56 (J) and 56 (I) and Rule 48 (1) (b) of the Central Civil Services (Pension) Rules, 1972 and gave “absolute right” to the Centre to retire such employees “if it is necessary to do so in public interest”.

The ministry said instructions have also been issued in the past for such periodic review of performance of government servants to ascertain if they should continue in service or be retired. “An effort has been made to review, consolidate and reiterate the guidelines so far issued on the subject at one place,” it added.

The order said in case of employees covered under Rule 48 (1) (b) of CCS (Pension) Rules, 1972, the review can be done after a government servant has completed 30 years of qualifying service. It added that “in the case of such retirement, the government servant shall be entitled to a retiring pension, provided that the appointing authority may also give a notice in writing to a government servant at least three months before the date on which he is required to retire in public interest or three months’ pay and allowances in lieu of such notice.”

The order further stated that a Review and Representation Committee would be constituted to deal with such cases. Also, it laid down the “broad criteria” to be followed by the Review Committee.

Further, it has been provided that “no Government servant should ordinarily be retired on ground of ineffectiveness, if, in any event, he would be retiring on superannuation within a period of one year from the date of consideration of his case.”

Also, it said, “No government servant should ordinarily be retired on ground of ineffectiveness, if, his service during the preceding 5 years or where he has been promoted to a higher post during that 5 year period, his service in the highest post, has been found satisfactory.”

The order had also cited the Supreme Court’s rulings on compulsory retirement. It said in the case of State of Gujarat vs Umedbhai M. Patel, the apex court had held:

“The law relating to compulsory retirement has now crystalized into definite principles, which could be broadly summarized thus: (I) Whenever the services of a public servant are no longer useful to the general administration, the officer can be compulsorily retired for the sake of public interest.”

Also, it had stated, “Ordinarily, the order of compulsory retirement is not to be treated as a punishment coming under Article 311 of the Constitution”; “for better administration, it is necessary to chop off dead wood, but the order of compulsory retirement can be passed after having due regard to the entire service record of the officer”; and that “any adverse entries made in the confidential record shall be taken note of and be given due weightage in passing such order”.

The ministry order also provided that “after issue of the orders of premature retirement, the concerned Government servant may put up representation for orders otherwise, within three weeks from the date of service of such notice or order and the matter may be placed before Representation Committee along with fresh input, if any.”