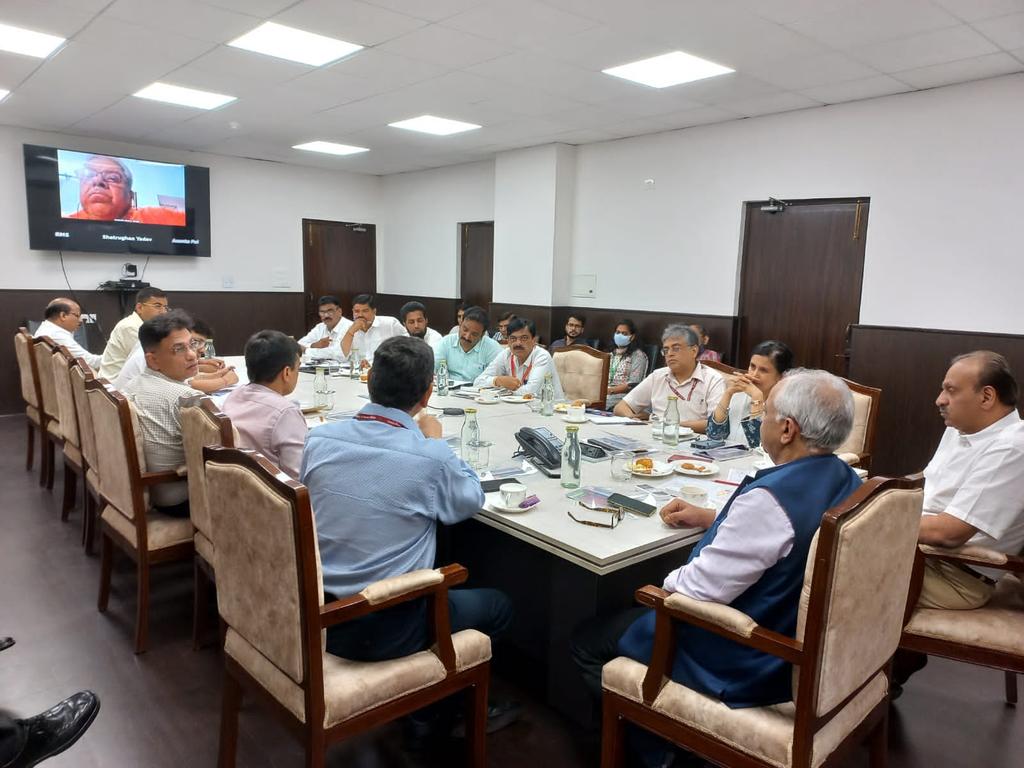 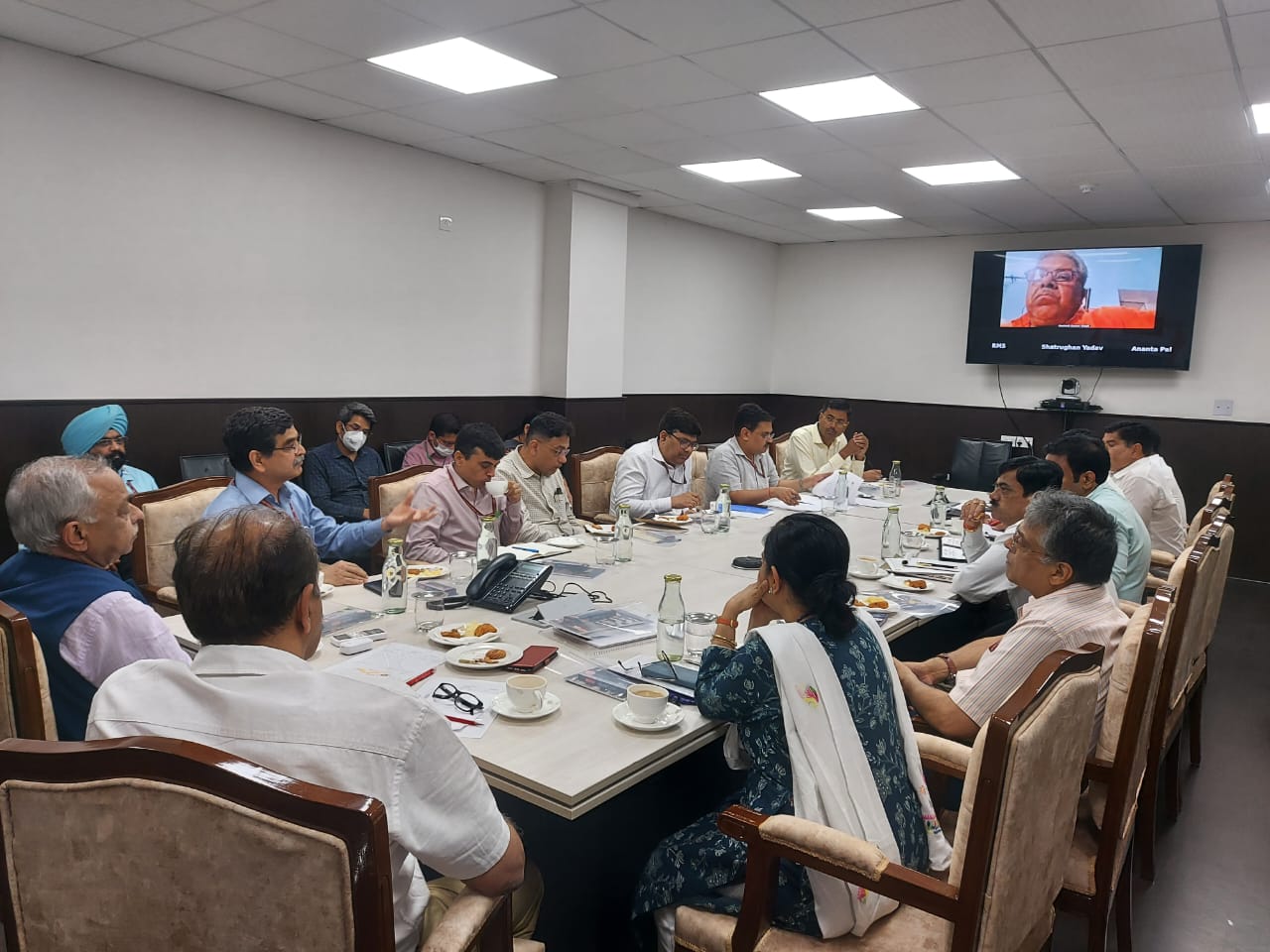 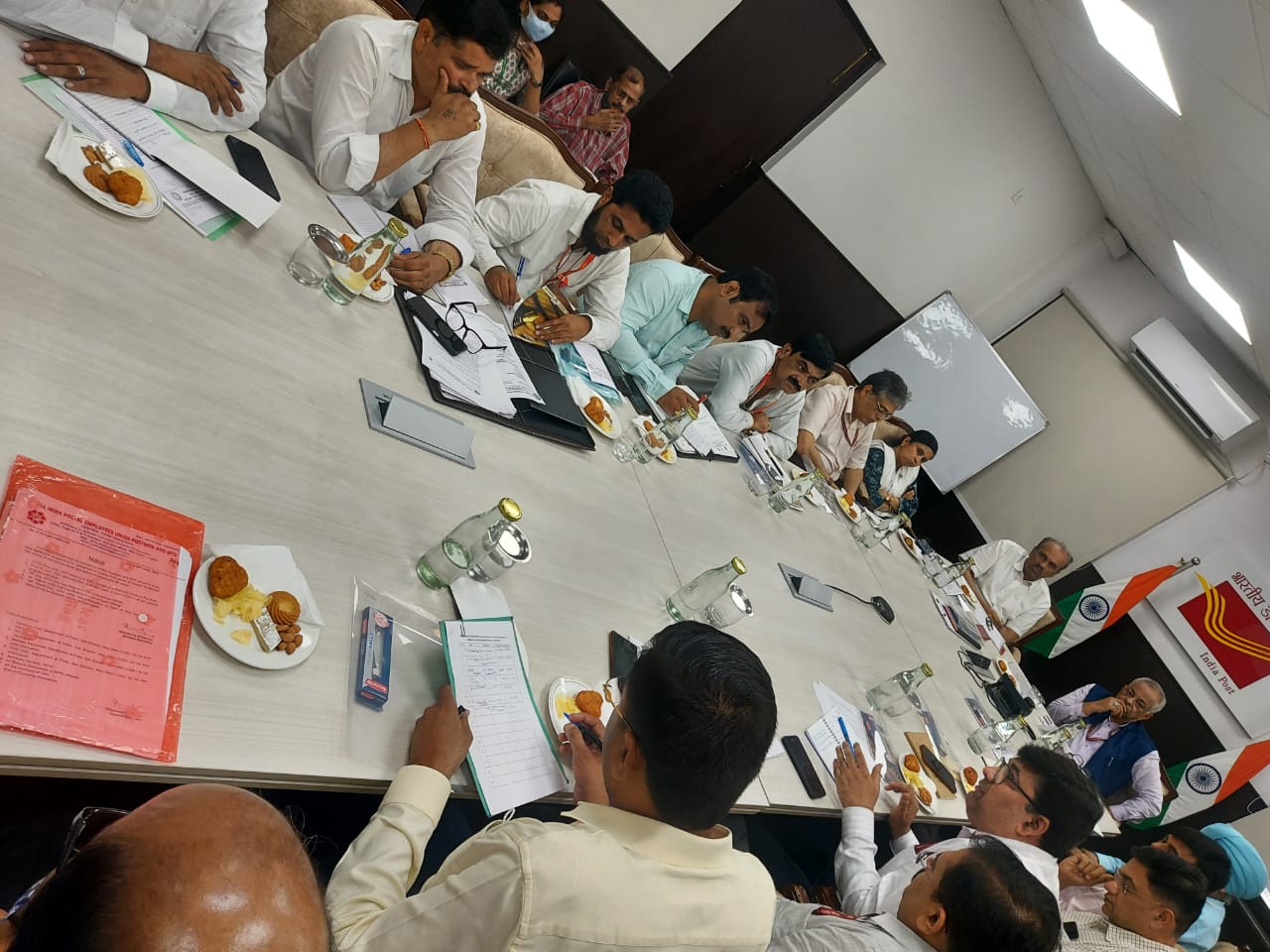 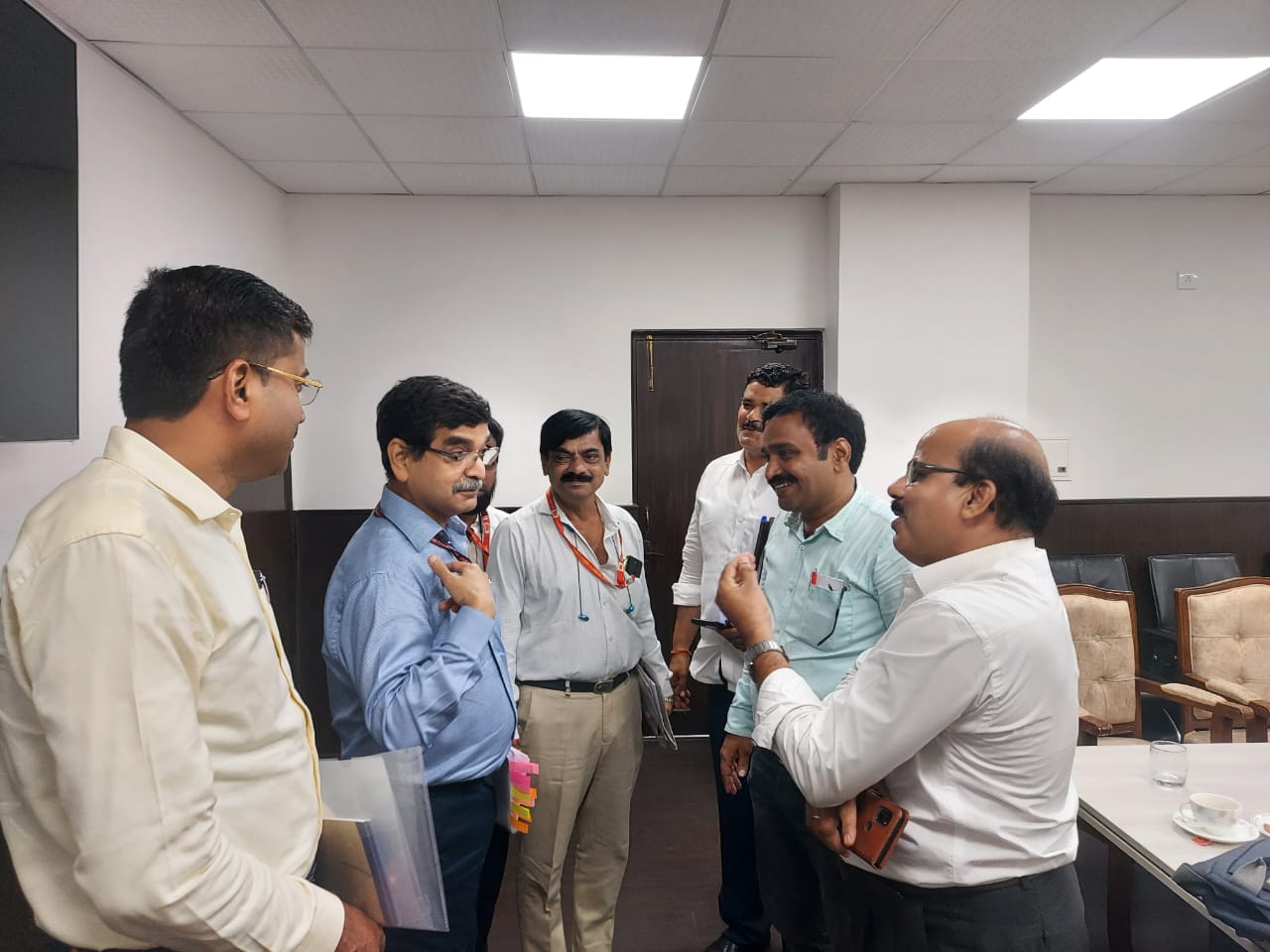 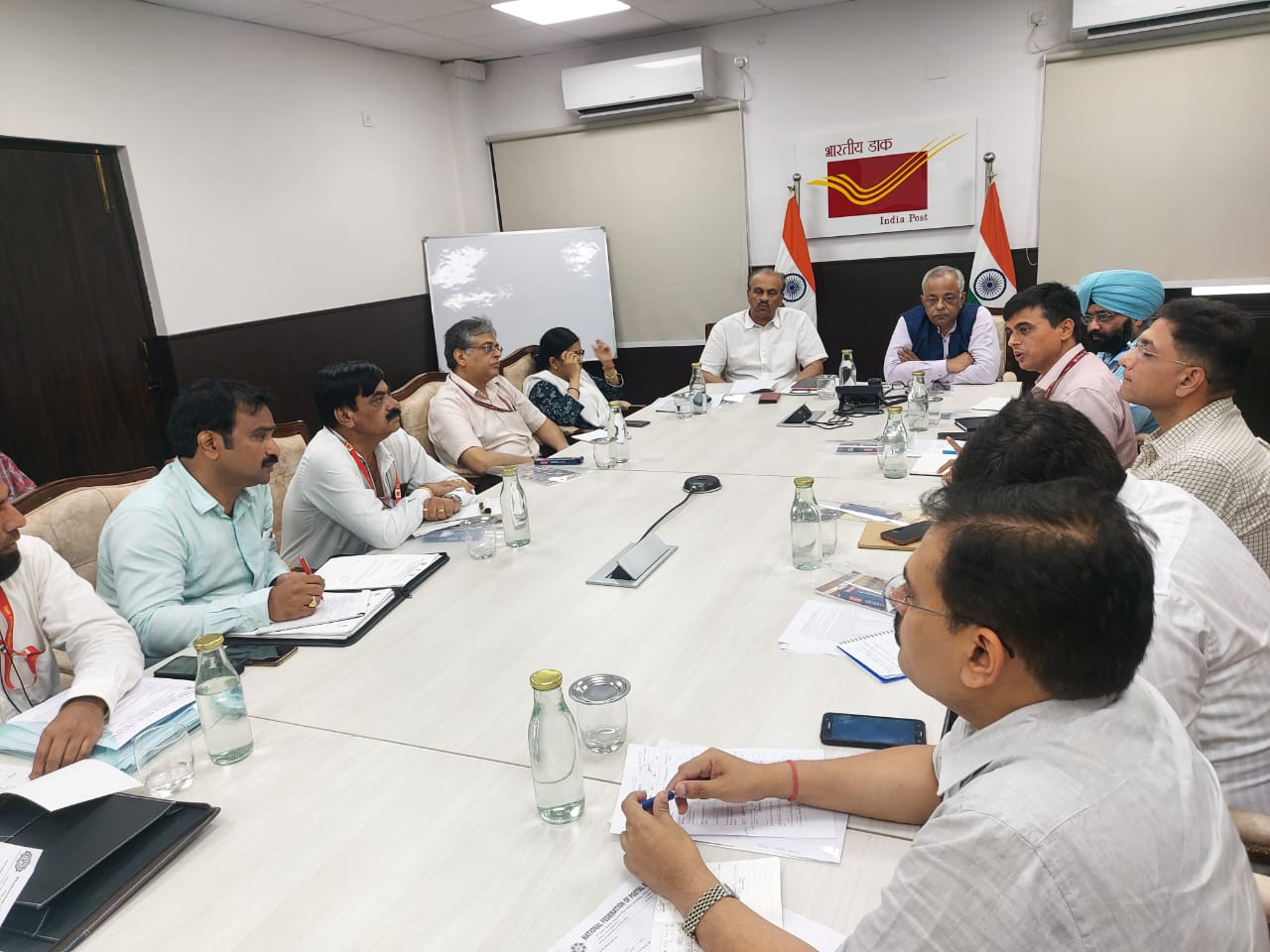 Dear friends,
We would like to inform you that a joint meeting of your Postal JCA (FNPO-NFPE) was held on Sunday, July 3, 2022 at 4 pm at FNPO Headquarters, T-24, Atul Grove Road, New Delhi.  corporatisation Postal services, merger of L1 and L2  in RMS, Entire delevery through NDC/parcel Hub, was discussed for over 3 hours.  It was decided to meet DG Sir and explain his role. According to this, all the leaders of both the organizations were at Dak Bhavan all day on Monday but unfortunately there was no light in Dak Bhavan on Monday so no official meeting was held.  A meeting was held with Mr. Vineet Pandey Sir (Secretary) and Mr. Alok Sharma Sir (DG) and Member O, all DDGs. Photos of the meeting are available on the Twitter and portal of the department.  At present there is no such corporatisation  policy of the government regarding the Department of Post, but you have to accept the change over time and you have to stand on our own feet now as the government will not be able to subsidize above 16000 crore for a long time.  PLI and RPLI have been instrumental in reducing the loss of Rs 1,000 crore from this alone. The second division is IPPB. This division is owned by the entire DOP.  So I was trying but I did not succeed but through IPPB you have got a great opportunity to provide services to customers like other banks, you can do things through ippb that you could not do through posb, e.g. UPI services  , Bill payment, AEPS, Door Step Banking, etc., IPPB Bank is guaranteed to get the status of Small Finance Bank in the next one to two years, after which an SPM can sanction a loan of at least Rs 25 lakh.  He said that about 4000 new BOs have been started in the last 3 years by the government to make the network of the department more efficient.  3rd party parcels and mails, your traditional service speedpost, register, this is a bit fine, but still 30% BO is that it does not book a single register / speed post in a month, or a single transaction is still in your service.  We are so far behind, we can contribute a lot, we have only 9% of the total parcel business in India, the rest is with other companies, we have a bigger network than these companies and even though the rates are low, we were able to attract this business.  No because we depend on railways and state transport for some other things but now we have made a big change and now we have decided to run RTN up to 500km which is our department's trains, we can give customers what they want.  There is only a lack of willpower, through RTI, Parcel Hub, and NDC, we can make a lot of progress in the parcel business, all the issues were raised by the admission.  The parcel department has been asked to accompany them. Also, your representative has asked you if the posb merged in ippb. The subsidy from the government will be stopped. The reply will not be stopped.  The department is also considering giving allowance and if the postman uses his own mobile for department work, the department is also planning to pay some amount per month after recharging it.  The answer is yes, finally all vacancies are being filled and all vacancies are being filled by June 2023, the meeting lasted a long time.  The full issues were not discussed, so a periodical meeting with union representatives was promised next month,
As not all the representatives of Postal JCA are available today, our next direction has not been decided yet, but in order to increase the coverage of Postal JCA, Officers Association, IP / ASP Association, BMS Union, SC ST Association will also be invited.  It has been decided to take it through Postal JCA,
Yours faithfully,
Shivkumar SG FNPO
Home
Subscribe to: Posts (Atom)