The Central Government proposes to make a new set of Indian Post Office Rules, 2020 (IPO Rules, 2020) which will be in super session of IPO Rules, 1933.

2. With the passage of time and induction of technology, the working of the Post Office has changed significantly since 1933, so there is a need for a new set of rules in sync with the today’s environment.

4. In the context of the above, the draft of proposed IPO Rules,2020 is hereby notified for information, seeking suggestions/feedback/comments/inputs/views from general public/stakeholders/customers. Notice is hereby given that the suggestions/feedback/comments/inputs/views received with regard to the said draft IPO Rules, 2020 will be taken into consideration till 6:00 p.m. of 9th October, 2020.

6. Suggestions/Feedback/Comments/lnputs Views are solicited from general public/stakeholders/users of post offices as it will make the Indian Post Office Rules more comprehensible and public friendly. Over the years, the post office has reinvented itself and has been at the forefront of delivering the various products/services to meet the needs of customers across the country. This is a further attempt to be more responsive towards general public/stakeholders/customers.

The following information need to be furnished along with the document (attachment) to be uploaded in India Post website:­ 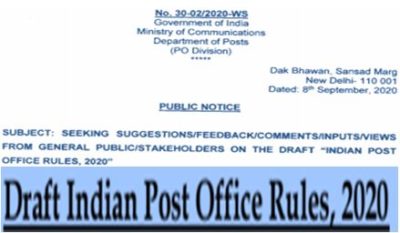 (all rules of Preliminary are newly inserted)

(1) These Rules may be called the Indian Post Office Rules, 2020.
(2) They shall come in to force on the date of its publication in the Official Gazette.