Consequent upon the decision taken by the Government on the recommendations made by the 7th Central Pay Commission on the subject of Risk Allowance and with the approval of D/o Expenditure, the rates of Risk Allowance were revised vide this Department O.M. No.- A-27018/01/201 7-Estt.(AL) dated 03.11.2020. Risk Allowance with revised rates has been payable from the date of issue of above mentioned OM with all other conditions envisaged in the OM No. 21012/4/88-Allowances dated 22.08.1988. However, for the purpose of ease of access, it has been decided to issue consolidated instructions on the subject of Risk Allowance to Central Government employees.2. Risk Allowance is presently given to Central Government employees engaged in hazardous duties or whose work will have a deleterious effect on health over a period of time.

4. It has also been decided that Ministries/Departments may work out suitable welfare schemes for periodical medical check-up of the staff exposed to risk in their job to ensure their good health.

(Sunil Kumar)
Under Secretary to the Government of India

No . A-27016/ 02/ 2017-Estt.(AL)
Government of India
Ministry of Personnel, Public Grievances & Pension
Department of Personnel & Training

Implementation of Government decision on 7th CPC’s recommendations on Night Duty Allowance (NDA).Consequent upon the decision taken by the Government on the recommendations made by the 7th Central Pay Commission on the subject of Night Duty Allowance, the following instructions are being issued in supersession of this Department’s O.M.s No. 12012/4/86-Estt.(Allowances ) dated 04.10.1989 and OM No.15020/2/92- Estt.(Allowances) dated 05 .05 .1994.

(i) Wherever the working hours have been arrived at after taking into account the night weightage factor, no further compensation may be admissible.

(ii) Night Duty will be defined as duty performed between 22:00 hours and 6:00 hours

(iii) A uniform weightage of 10 minutes shall be given for every hour of night duty performed.

(iv) The ceiling of basic pay for entitlement of Night Duty Allowance shall be Rs. 43600/- per month.

(vi) This formulation will extend to all employees across all Ministries/ Departments who were already in receipt of NDA.

(vi) The amount of NDA will be worked out separately for each employee depending upon the basic pay the concerned employee is drawing on the date of performing the night duty. The existing practice for giving same rate of NDA to all employees with a particular Grade Pay should be discontinued.

(vii) A certificate should be given by the supervisor concerned that Night Duty is essential.

2.The above instructions will be applicable with effect from 1st July 2017

(Rajendra Prasad Tewari)
Under Secretary to the Government of India 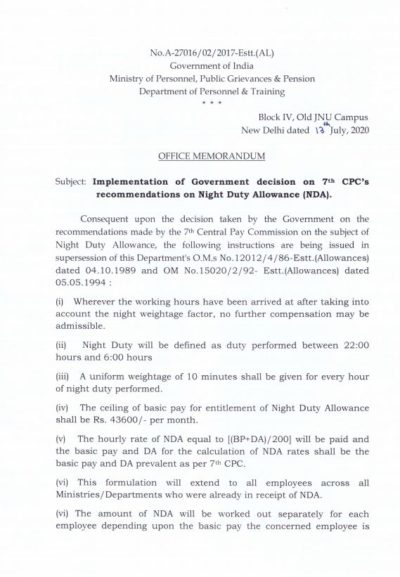 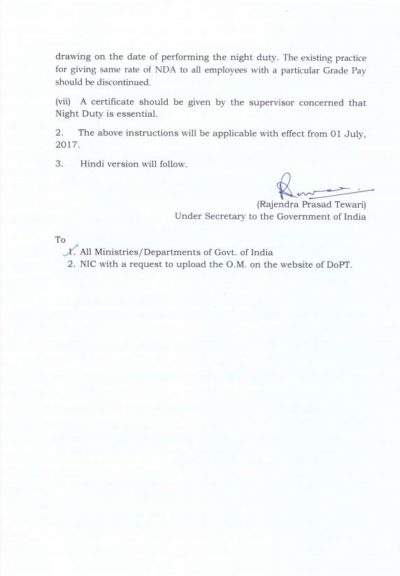 Implementation of the recommendation of 7th CPC on Over Time Allowance

Subject: Implementation of the recommendation of 7th CPC on Over Time Allowance – reg.

The undersigned is directed to say that as per Dept. of Expenditure’s Resolution No. 11-1/2016-IC dated 06.07.2017, following is the decision of Government on Overtime Allowance (OTA):“Ministries/ Departments to prepare a list of those staff coming under the category of ’Operational Staff’. Rates of Overtime Allowance not to be revised upwards”.
2. Further it has been clarified by the Dept. of Expenditure that the Government has decided that given the rise in the pay over the years, the recommendations of the 7th CPC to discontinue OTA for categories other than Operational Staff and industrial employees who are governed by statutory provisions may be accepted.
3. Accordingly, it has been decided to implement the aforesaid decision of the Government on Overtime Allowance across all the Ministries / Departments and attached and subordinate office of the Government of India. The following definition shall be used to define Operational Staff.
“All non-ministerial non-gazetted Central Government servants directly involved in smooth operation of the office including those tasked with operation of some electrical or mechanical equipment.”
4. The concerned Administration Wing of the Ministries / Departments will prepare a list of operational Staff with full justification based on the above parameters for inclusion of a particular category of staff in the list of operational staff with the approval of IS (Admn.) and Financial Adviser of the concerned Ministry / Department.
5. The grant of OTA may be linked to biometric attendance subject to the conditions mentioned below.
a) OTA should be paid only when his/ her senior officer directs the concerned employee(s) in writing for staying back in office to attend urgent nature of work.
b) The OTA will be calculated on the basis of biometric attendance.
c) The OTA for Staff Car Drivers should be linked with biometric system as normally, the designated parking is allotted in the office building. However, in cases where the parking lot is provided far from office, the Staff Car Driver would mark his/ her attendance while leaving from his office and a grace time of not exceeding 2 hours should be allowed to cover the distance travelled after leaving office, including the time to drop the officer and then reaching the parking lot. In such cases, calculation can be done from log books, duly verified by the officer concerned.
d) The OTA to field officials should be calculated on the basis of biometric attendance, as normally, such officers are given facility of official transport to attend the field work. Such officers are supposed to report in office before proceeding to field. In cases, where officials are required to attend the field work directly from home, they may be extended facility of official transport from home in lieu of transport allowance and OTA may be given on the basis of the log book of that vehicle, duly verified by their senior officers.
6. Since, the Government has decided not to revise the rates of OTA, the rates as prescribed in this Department’s OM dated 19th March, 1991 for Office Staff, Staff Car Drivers and Operative Staff will continue to operate subject to their fulfillment of the above conditions.
7. All the existing instructions, except “to the extent superseded by this O.M., will continue to remain in force.
8. These instructions will be applicable with effect from 01 July, 2017.
9. In so far as persons serving in the Indian Audit and Accounts Department are concerned, these instructions are being issued after consultation with the Comptroller & Auditor General of India.
10. Hindi version will follow.
Sd/-
(Pramod Kumar Jaiswal)
Under Secretary to the Government of India 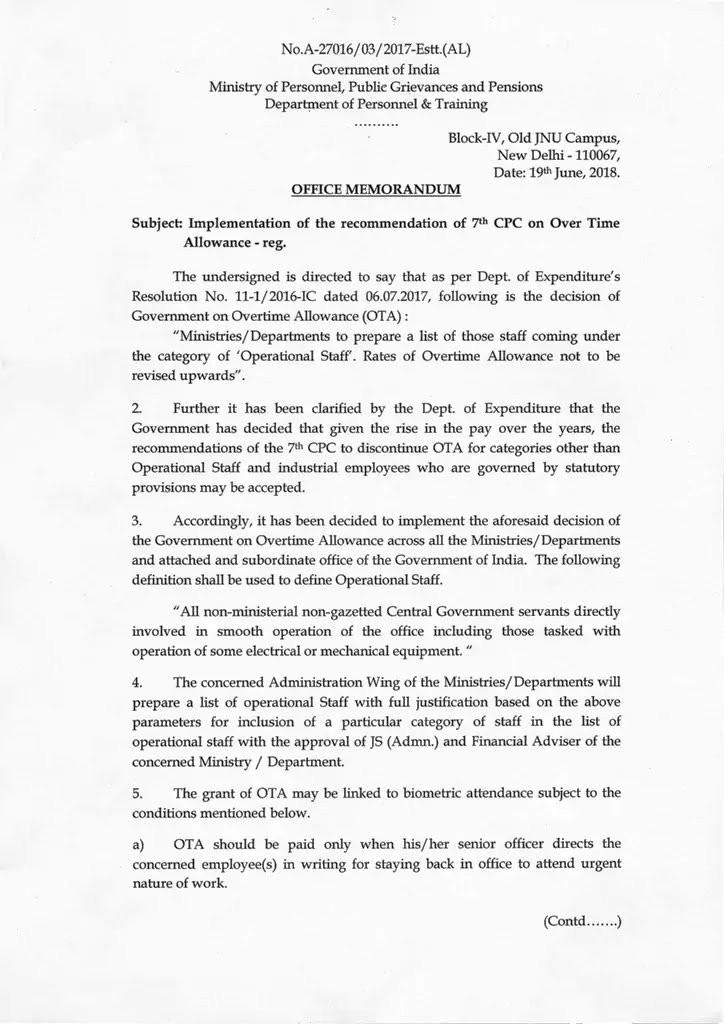 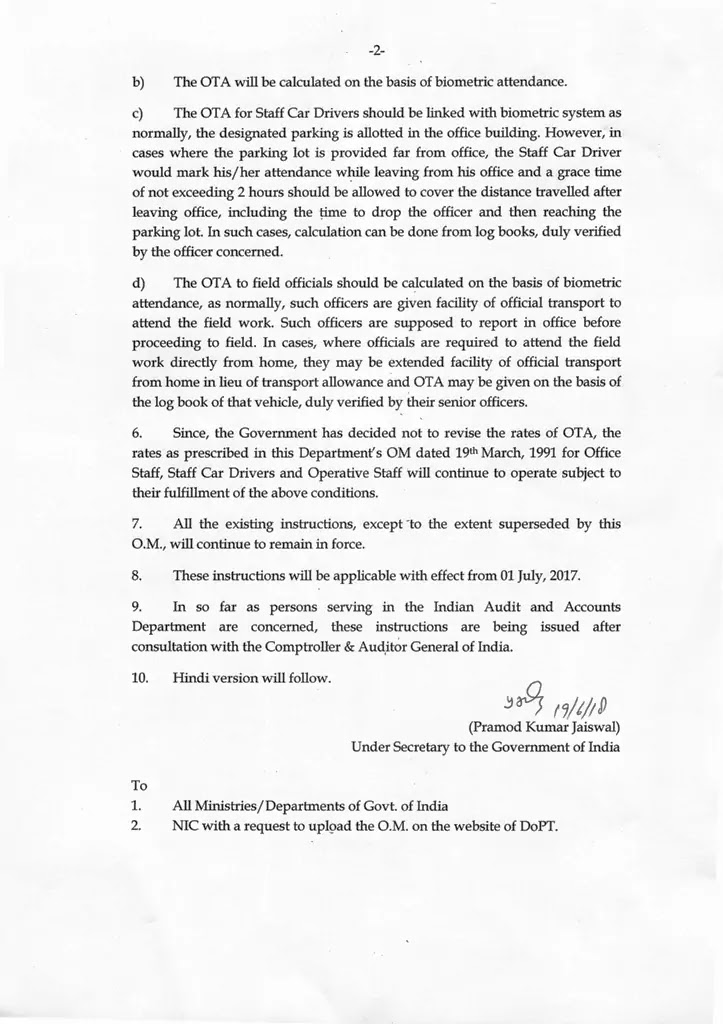 Special Allowance for child care for women with disabilities.

Subject: Recommendations of the Seventh Central Pay Commission — implementation of decisions relating to Special Allowance for child care for women with disabilities.

Consequent upon the decision taken by the Government on the recommendations made by the Seventh Central Pay Commission for providing extra benefits to women employees with disabilities especially when they have young children and children with disability, the President is pleased to issue the following instructions:-
(i) Women with disabilities shall be paid Rs.3000/-per month as Special Allowance for Child care. The allowance shall be payable from the time of the child’s birth till the child is two years old.
(ii) It shall be payable for a maximum of two eldest surviving children.
(iii) Disability means a person having a minimum Disability of 40% as elaborated in Ministry of Welfare’s Notification No. 16-18/97-NI.I dated 1.6.2001 and amended from time to time.
(iv) The above limit would be automatically raised by 25% every time the Dearness Allowance on the revised pay structure goes up by 50%.
2. These orders shall be effective from 1st July, 2017.
3. Insofar as persons serving in the Indian Audit and Accounts Department are concerned, these orders issue in consultation with the Comptroller and auditor General of India.
Hindi version will follow.
(Navneet Misra)
Under Secretary to the Govt. of India 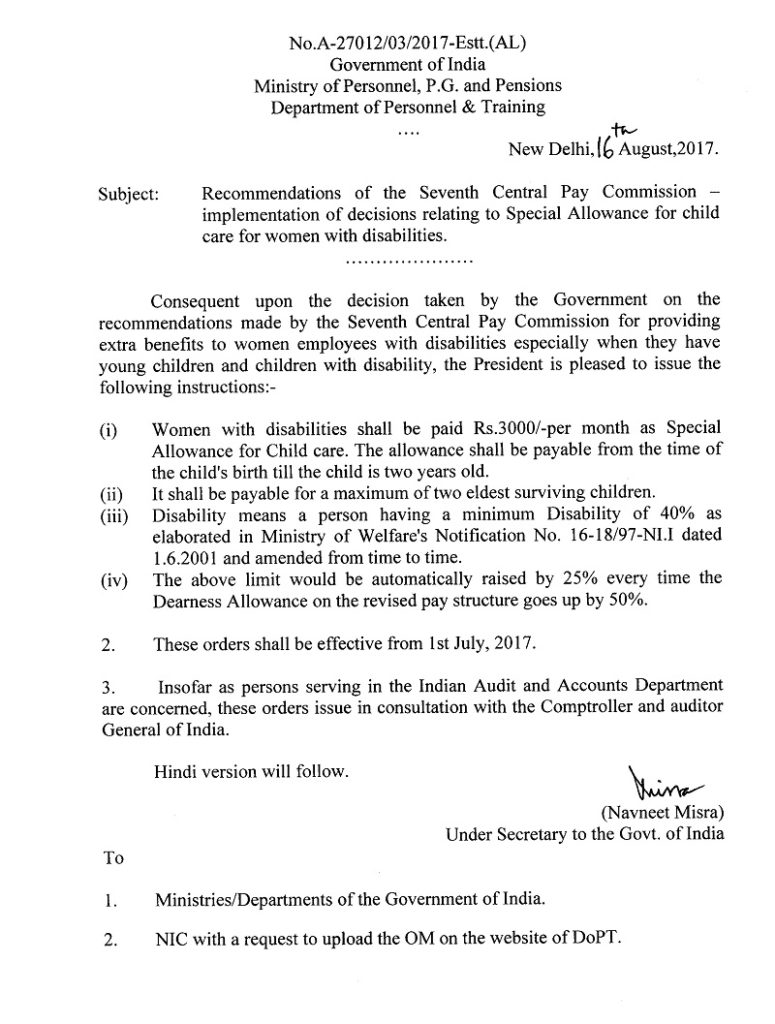