Implementation of recommendation of 7th CPC on Over Time Allowance(OTA) preparation of a list of those staff coming under the category of 'Operational Staff' reg. Read more


Cabinet approves additional DA of 3% over the existing rate of 9% to govt. employees and dearness relief to pensioners from 1.1.2019Read more

19/02/2019
LDCE for LGOs for promotion from Postman/Mail Guard and MTS to PA./SAcadre- Final Answer Key in respect of.Read more

Regulation of LTC claims when portion of journey are performed by private transport-Read more.

Implementation of recommendation of one man committee on wages and allowances of Gramin Dak Sevaks (GDSs)- Drawl of arrears. Read more
14/02/2019

Constitution of a committee in the Department of Posts to identify GDS posts suitable for benchmark disability prescribed in Rights of Persons with Disabilities Act, 2016 Click here to view

Clarification of eligibility Clientele base of PLI Read more 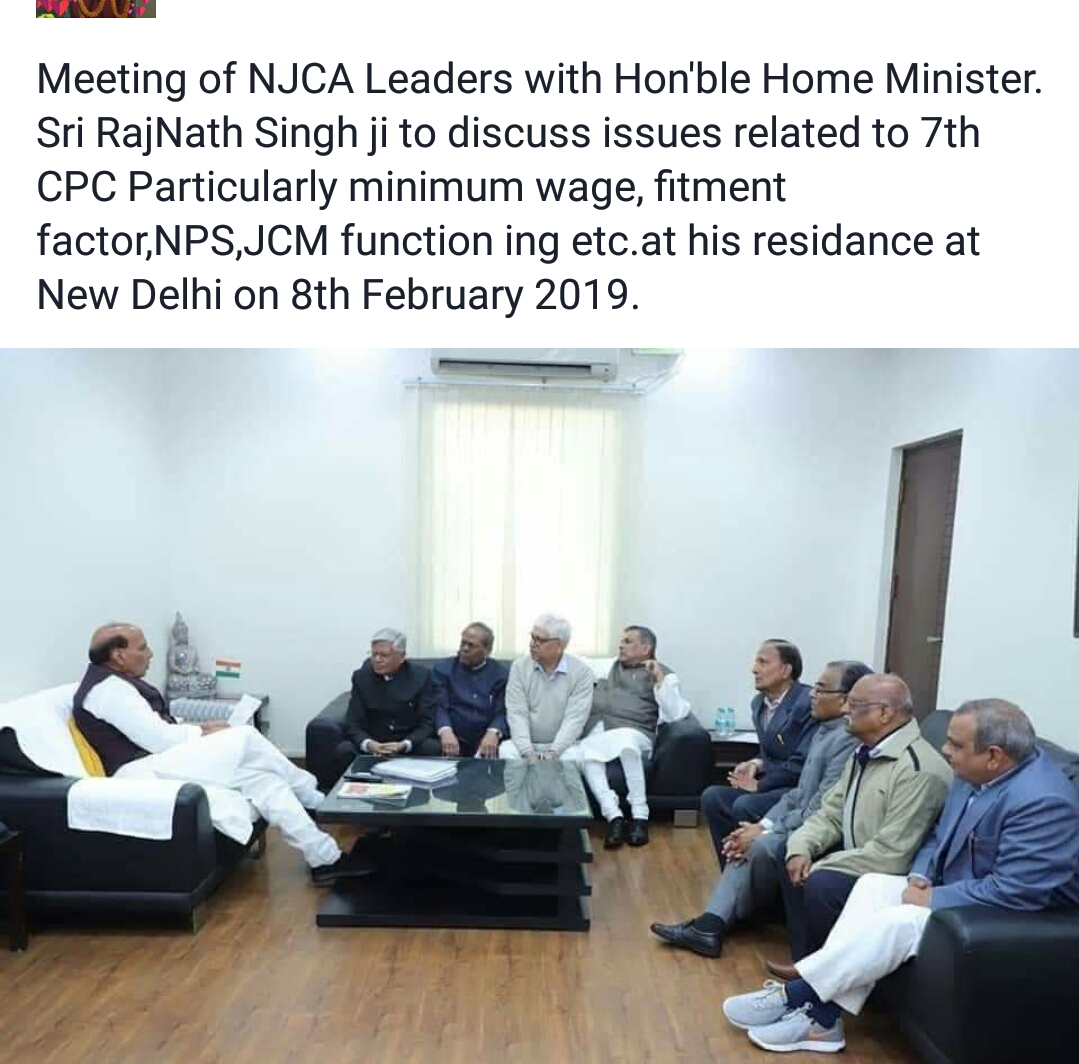 You may kindly recall that, aggrieved by retrograde recommendations of the VII CPC in general and particularly related to Minimum Wage and Fitment Formula as also on the issue of Restoration of Defined Old Pension Scheme for the Central Government Employees, the Central Government Employees, including Railwaymen, had decided to go on “Indefinite Strike” w.e.f. 11th July, 2016 since 06:00 hrs., in the morning. With a view to resolve these important issues amicably, a meeting was convened by your goodself on 30th June, 2016, wherein Hon’ble Finance Minister, Hon’ble Minister for Railways and Hon’ble Minister of State for Railways, were also present.

After detailed deliberations, the representatives of the Central Government Employees(NC/JCM) were assured that, the Union Government would favourably consider their demand of improvement in Minimum Wage and Fitment Formula, recommended by the VII CPC. It was also assured to look into the demand of Scrapping Contributory NPS in respect of the Central Government Employees and restoration of Defined Old Pension Scheme.

The representatives of the Central Government Employees were made to understand in the said meeting that, the Government would take decision in regard to above demands within a timeframe of four months by constituting committees for the purpose. On the assurance of the Group of Ministers, the proposed “Indefinite Strike” was deferred by the NC/JCM.

You may kindly appreciate that, substantially long time has already elapsed and the Federations of the Railways and other Central Government Employees, who had participated in the said meeting, have still been awaiting the positive outcome of the discussions held and assurances given by the Group of Ministers therein.

There is, therefore, serious discontentment brewing among the Central Government Employees, including the Railwaymen, and it is quite difficult to further contain the same any longer. There is, therefore, tremendous pressure to revoke the decision of the “Indefinite Strike” of the Central Government Employees due to non-settlement of the said issues.

I earnestly hope that, your goodself will take these issues with all seriousness for resolving the same before it is too late, in the larger interest of conducive atmosphere in the country.

Request to grant one increment to the officials
who retires on 30th June after rendering full 12 months service
T.N.Rahate, SG, FNPO sent letter.Click here to read


The invitation to the 11th Federal Congress  was given to Hon'ble shri A. K. Nanda, Secretary  Department of Posts, who agreed to come to the Federal Congress.Click here to view

Improvement of after sales services of PLI/ RPLI : w.e.f April 2019 Incentive to sales force will be paid on monthly basis - Directorate of PLI.Read more


Constitution of an Expert Committee in the Department of Posts to identify Group 'B' & 'C' posts suitable for benchmark disability prescribed in Rights of Persons with Disabilities Act, 2016 Click here to view

Notional monetary benefit to the the Postmen/ Mailgurd Read more

Joint   Dharna in Front of Directorate.Click here to view