Emerging as a leading distribution channel for the e-commerce sector, India Post collected over Rs 800 crore through cash-on-delivery (CoD) facility and is looking to further strengthen its position in the segment by starting a pilot service for same-day delivery.

The postal department has also earned around Rs 70-80 crore through speed post in the year 2014-15 from e-commerce business.

"Since the introduction of CoD facility, the Department of Post has collected more than Rs 800 crore and remitted to customers," an official said.

In order to generate more business, the postal department is reviewing its service features to attract more number of e-commerce customers, the official further said.

"As part of this exercise, the Department of Posts has started pilot for same/next day delivery in identified cities for identified PIN codes. A national account facility has also been introduced under Speed Post," he added.

The CoD facility was launched in December 2013 to cater to the needs of customers and benefits from the growing e-commerce market.

The CoD has emerged as one of the most sought after services for e-commerce entities. Customers in the country tend to prefer CoD as the online payment modes are yet to catch up in many parts of the country while many people are not comfortable with advance payments for products purchased online.

The initiatives taken by the department for parcel segment have resulted in revenue of Rs 105.51 crore in 2014-15.

With dwindling letter or document traffic, the department is focusing on the fast-growing parcel segment and various measures have been taken to modernise the department under the Digital India initiative.

As part of initiatives to leverage the e-commerce sector, the department has forged tie-ups with leading online market places like Snapdeal, Amazon, Paytm and Yepme for parcel delivery and has also set up modernised 48 centres to handle the packages.

The e-commerce sector in India is growing at 47 per cent CAGR and India Post is the only delivery agency with a pan-India reach, the official said.

Communications and IT Minister Ravi Shankar Prasad had earlier said that India Post with the world's largest postal network was best suited to offer delivery services to e-commerce firms.

The Minister had suggested that India Post should strive to become the largest player in the e-commerce segment.

The Postal Department has 1,54,882 post offices, of which 1,39,182 are in rural areas. The department employs around 4,60,000 personnel and handles close to six billion mail pieces in a year.
Source:Business-standard.com

Promotions in the cadre of HSG-II (General line) - AP Circle

Circle office, Hyderabad has ordered promotions to the following 27 LSG Officials to the cadre of HSG-II (General line) vide CO letter no ST/5-1(P)/2015/HSG-II/DPC/Corr dated 30.10.2015.CO has also issued postings to 5 officials alloted to Hyd City region.
Copy of CO Letter is reproduced below 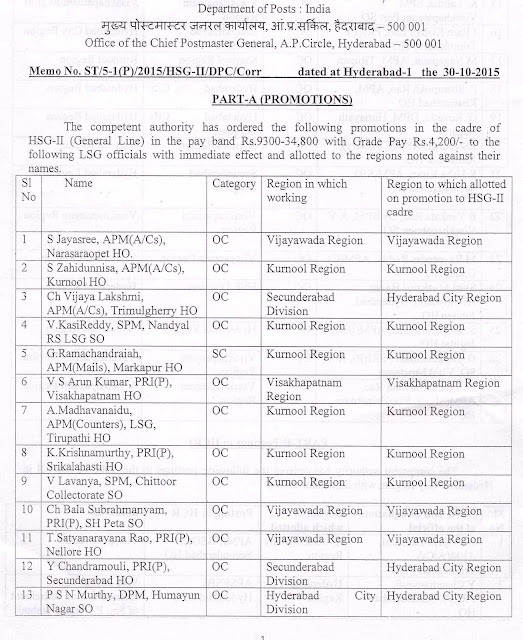 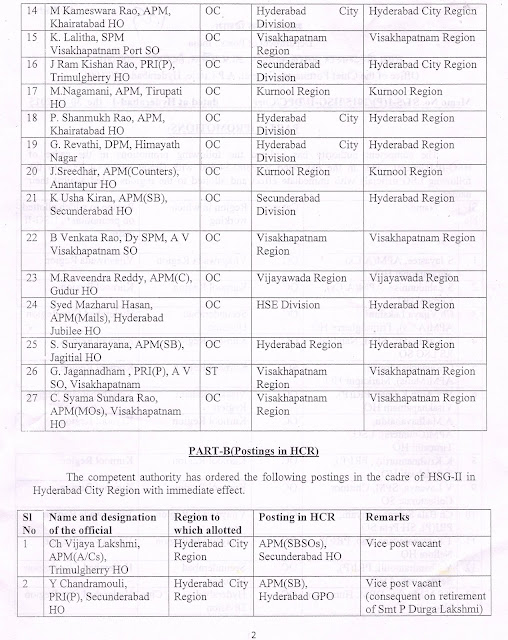 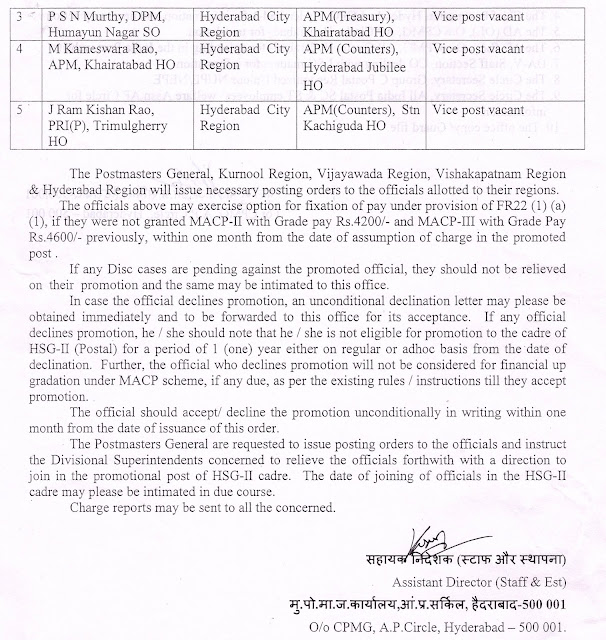 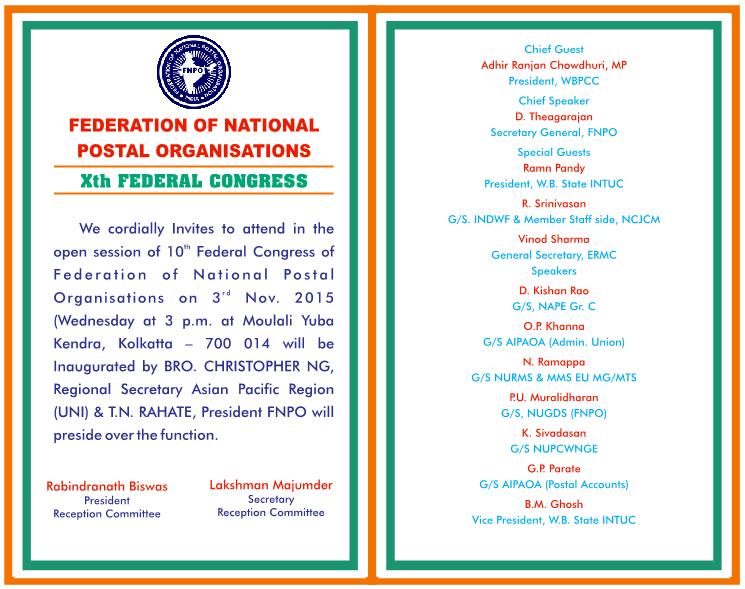 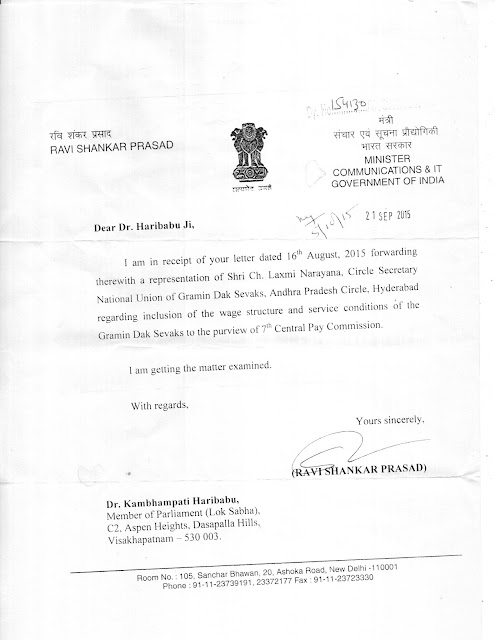 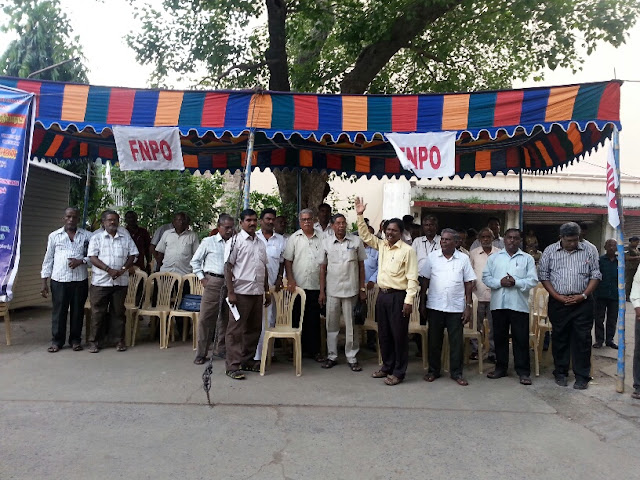 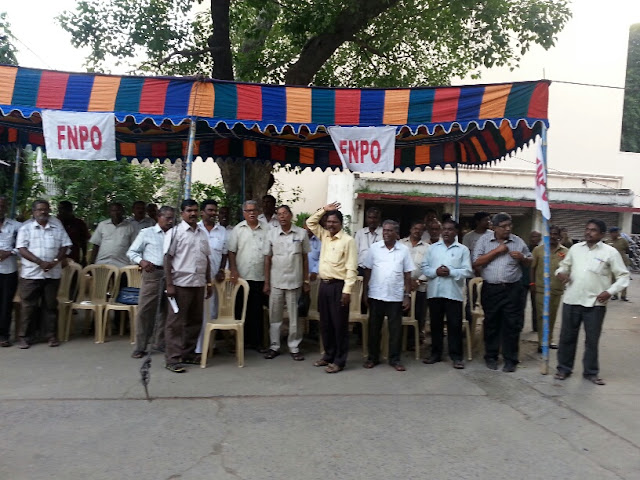 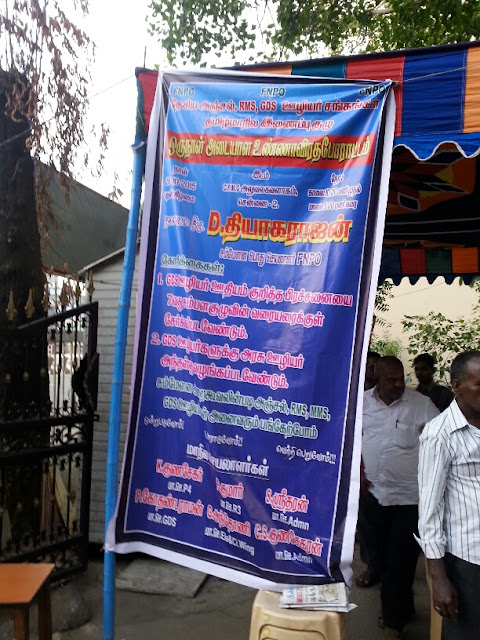 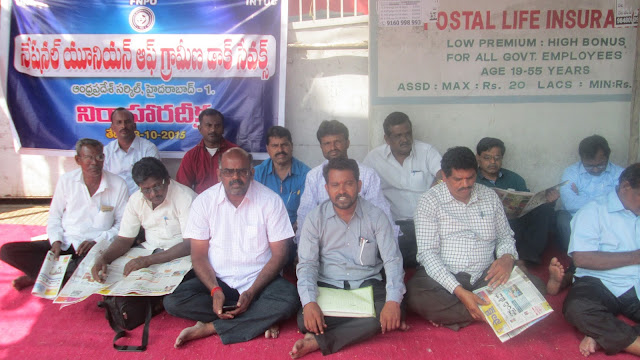 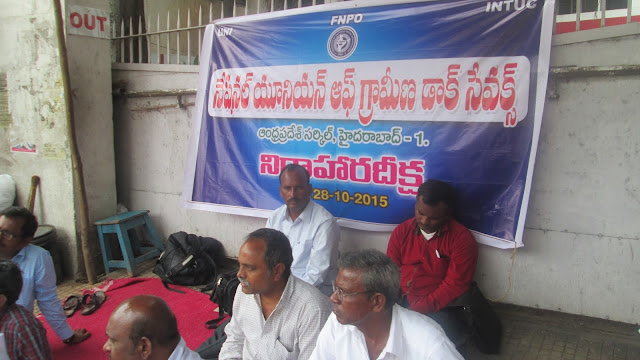 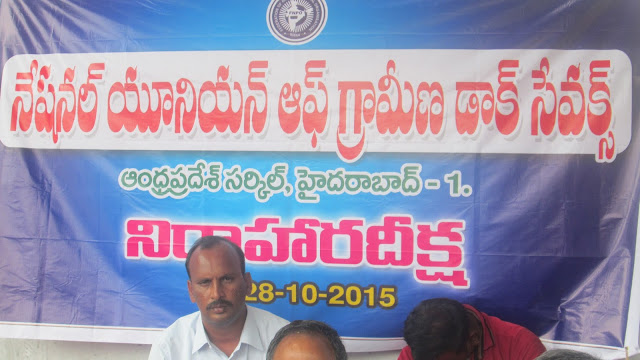 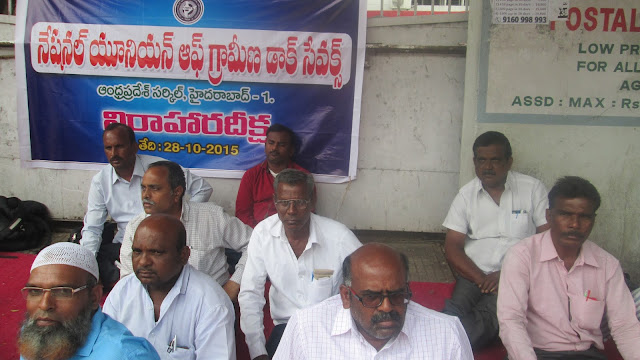 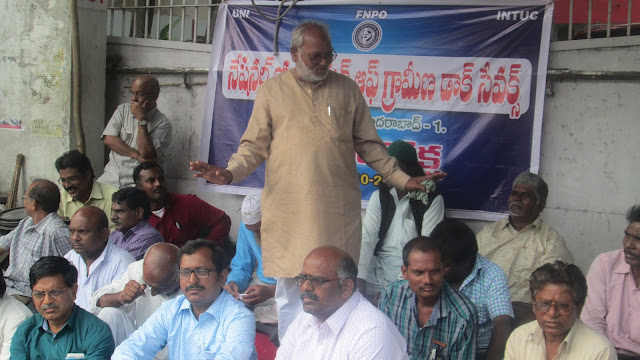 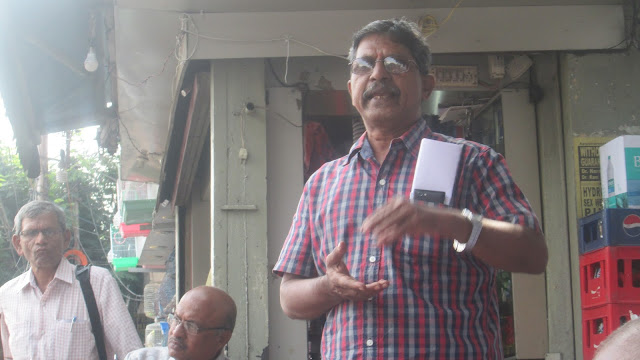 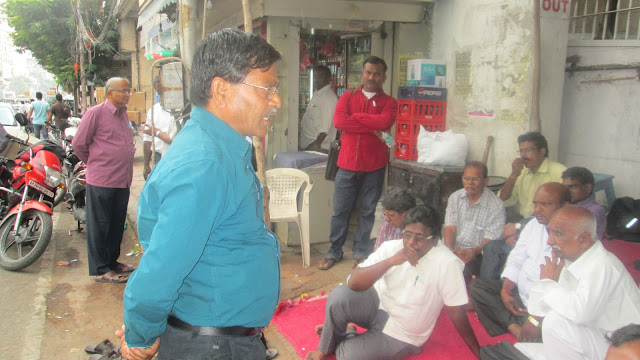 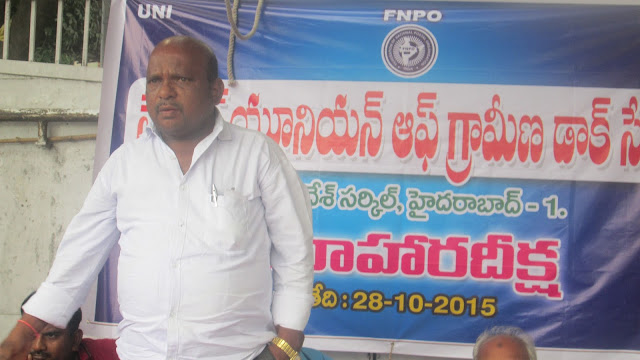 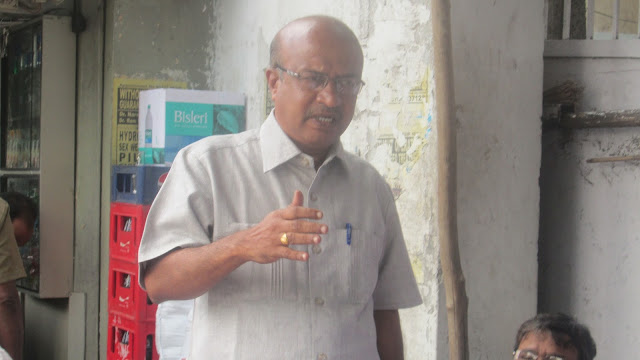 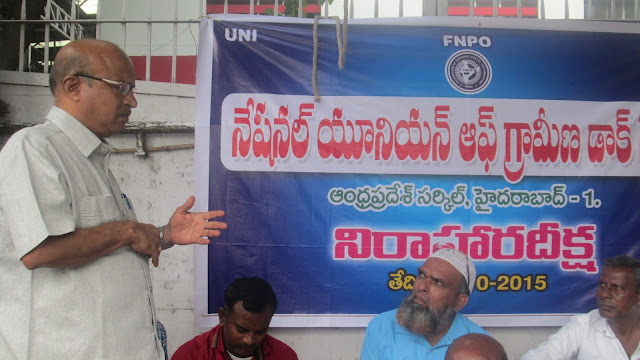 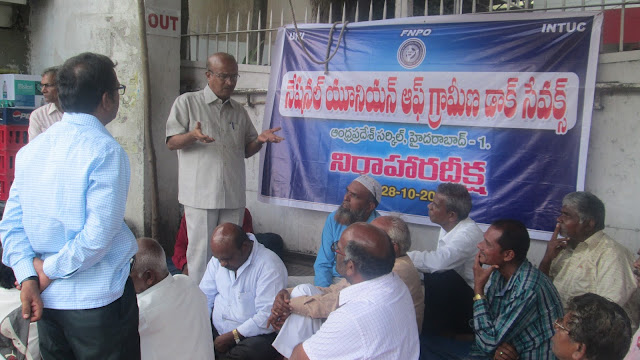 The commission may recommend government to ask Information and Technology department, whether it is possible to have systems in place for monitoring and supervising work being done remotely by disabled and women central government employees .

“Allowing disabled and women central government employees a choice in where and how they work can increase employee loyalty and job satisfaction, and the government needs to apply it for a big win to boost their confidence, which will also give the productivity,” said a pay panel official.

The studies revealed those disabled and women employees who have the option of working outside of the office also reported somewhat lower levels of stress and exhaustion. And studies have suggested that employees tend to get higher performance evaluations.

Allowing employees to work away from a government office means increased opportunities for those women and those persons with disabilities. It can also help the environment, as the employees are able to eliminate lengthy commutes.

The work from home filtered into jobs that have little to no stress and minimal travel.

At present, the strength of disabled employees in the total workforce of the central government is 9,339, which constitutes 0.3 per cent of the total staff strength of 29.59 lakh, according to an RTI reply to The Indian Express from the Department of Personnel and Training (DoPT).

“We are looking at whether it is technologically possible to allow disabled and women employees for working from home,” said the official.

“A need was felt to provide work from home facility to persons with disabilities and women to enable them to effectively discharge their duties.,” he added.

The government constitutes the Pay Commission almost every 10 years to revise the pay scale of its employees and often states also implement the panel’s recommendations after some modifications.

Headed by Justice Ashok Kumar Mathur, the four-member Commission was appointed in February 2014 and the commission will hand over its recommendations to government within December 31, 2015.

As part of the exercise, the current Pay Commission holds discussions with various stakeholders, including organisations, federations, groups representing civil employees as well as defence services. 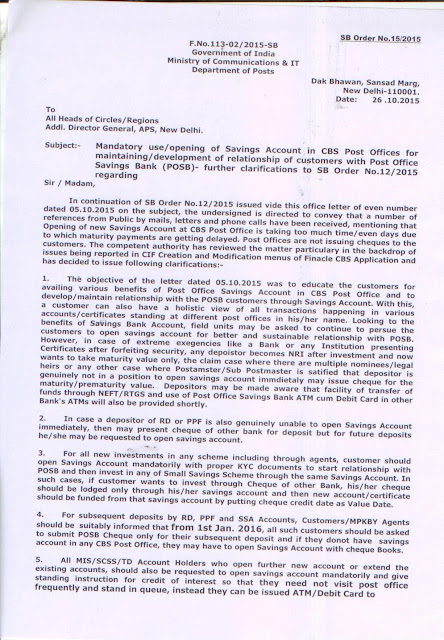 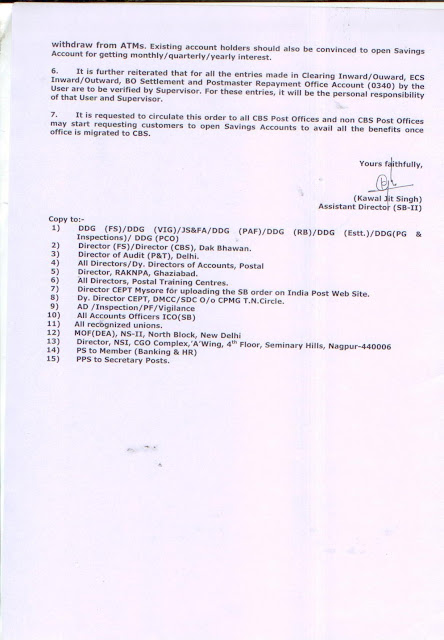 MUMBAI: Keeping in view guidelines of the Centre, the Maharashtra government has decided to increase the festival advance of non-gazetted employees to Rs 10,000.
The advance, which was earlier Rs 5,000, will cover nine major festivals - Diwali, Ramzan Id, Christmas, Parsi New Year, Rosh Hoshnaa (Jewish new year), Buddha Jayanti, Independence Day, Republic Day and Sanvatsari (last day of Jain's 'Paryushan).
"Non-gazetted state government employees will now get festival advance of Rs 10,000 for nine major festivals. The limit earlier was Rs 5,000. Finance Minister Sudhir Mungantiwar has taken this decision keeping the guidelines of the Central government in mind," an official from the state finance department said.
A Government Resolution (GR) in this regard has also been issued by the finance department on October 18.
"As per the GR, non-gazetted state government employees having pay band of Rs 4,800 or less will get this benefit," the official said.

Parliamentary Committee of Welfare of Other
Backward Classes held on 14.10.2015.
The Hon'ble Chairman and other Hon'ble Members of the Committee
expressed dissatisfaction over low representation of OBCs in Central Government services and directed DoP&T to collect data sought by NCBC and submit to the Committee urgently.
CLICK HERE THIS LINK TO SEE ABOVE SEE DETAIL


The Cabinet is expected to deliberate and consider a bill to amend the Payment of Bonus Act, 1965 today.


The Cabinet is likely to approve an amendment bill that seeks to raise the bonus limit to Rs 7,500 and wage ceiling to Rs 21,000 per month for getting the reward, among others.
The Cabinet will consider a bill to amend the Payment of Bonus Act, 1965, sources said.
According to the proposal, the wage ceiling for getting bonus will be increased from existing Rs 10,000 per month to Rs 21,000 per month, thus making more workers eligible for the reward.
It also proposes to increase the maximum amount of bonus under the legislation to Rs 7,500 from existing Rs 3,500.
"The Cabinet is likely to consider and approve the bill to amend the Payment of Bonus Act, 1965, in its meeting Wednesday," the source said.
Once approved by the Cabinet, the amendment bill will be tabled in Parliament for making it into a law. The winter session of Parliament is likely to start next month.
This amendment in the Act to increase wage ceiling and maximum amount of bonus was one of assurances given by the Centre after 10 central trade unions went on one-day strike on September 2.
The government had hinted at meeting workers' aspirations on nine out of 12 demands submitted by the unions.

FNPO affiliated union  NUGDS decided to go on a day long hunger strike on 28/10/2015 in front  of Circle office across the nation demanding
1) Inclusion of GDS issues in the terms of reference of seventh CPC
2) Grant of civil servant status to GDS.
1)Letter send by the NUGDS General Secretary.
2)Letter send by SG FNPO to the  Secretary
Click the above link to the letters.
FNPO affiliated unions circle secretaries are requested to cooperate with NUGDS colleagues to organize the hunger strike and make the programme success. 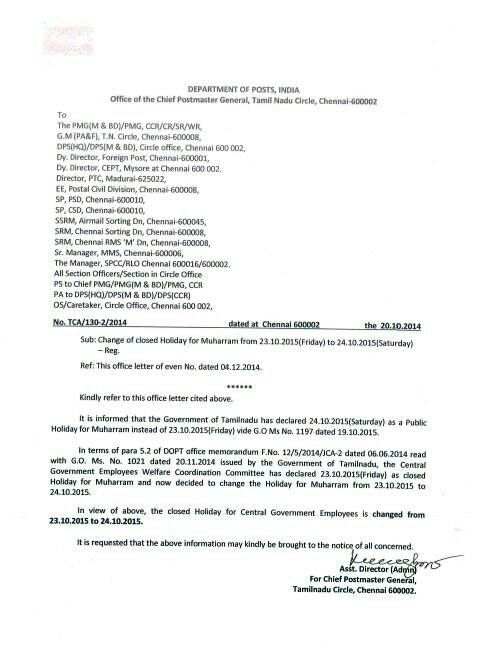