Feel the spirit of Ugadi,
Be joyful and glad.
Celebrate the occasion with total cheer.
Happy Ugadi to you and u r Family….!!!
- See more at: http://allindiaroundup.com/ugadi-wishes-greetings-quotes-kannada-telugu-english/#sthash.1z3kqLFP.dpuf

Feel the spirit of Ugadi,
Be joyful and glad.
Celebrate the occasion with total cheer.
Happy Ugadi to you and u r Family….!!!
- See more at: http://allindiaroundup.com/ugadi-wishes-greetings-quotes-kannada-telugu-english/#sthash.SnjAuAlj.dpuf

1)7th CPC invites FNPO to meet separately to seek our views on  Our joint Memorandum. 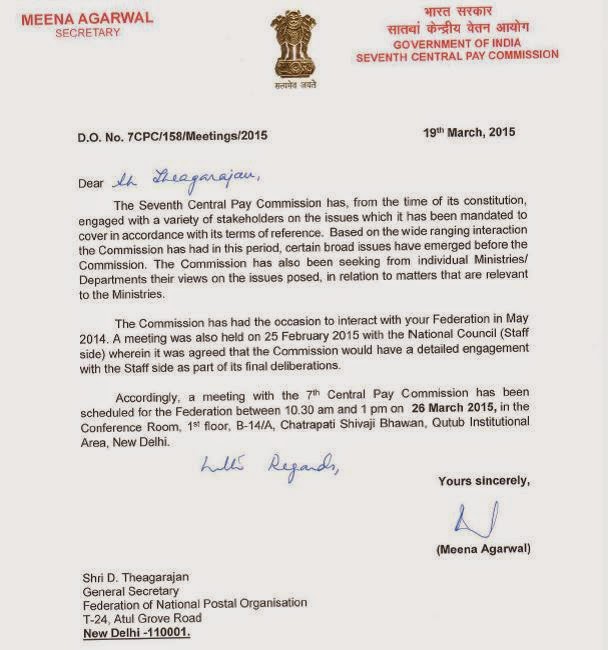 Subject : Declaration of Assets and Liabilities by public servants under section 44 of the Lokpal and Lokayuktas Act, 2013 – Clarification regarding formats to be used for filing returns under the Act.

The undersigned is directed to refer to this Department’s DO letter of even No. dated 29th December, 2014 and the O.M. of even No. dated it January, 2015 regarding furnishing of information relating to assets and liabilities by public servants under section 44 of the Lokpal and Lokayuktas Act, 2013, forwarding therewith copies of the Central Government’s notifications dated 26th December, 2014 containing :-

(a)    Amendment to the Lokpal & Lokayuktas (Removal of Difficulties) Order, 2014, for the purpose of extending the time limit for carrying out necessary changes in the relevant rules relating to different services from “three hundred and sixty days” to “eighteen months” , from the date on which the Act came into force, i.e., 16 th January, 2014; and

(b)   The Public Servants (Furnishing of Information and Annual Return of Assets and Liabilities and the Limits for Exemption of Assets in Filing Returns) Amendment Rules, 2014, extending the time limit for filing of revised returns (pl see proviso under sub- rule 2 of rule 3 of the principal rules) by all public servants from 31st December 2014 to 30th April, 2015.

(iii) The annual return for subsequent years as on 31st March every year should be filed on or before 31 6t July of that year.

3. The following Assets & Liabilities Return forms (both in English and Hindi) are enclosed herewith as indicated below:

3)Helicopter Rides under LTC for Central Government Employees – Proposal under Consideration of Govt – DOPT called for cost analysis on Helicopter flights
As per a news item reported in the Economic Times, DOPT is considering a proposal to bring Helicopter Rides under LTC Scheme applicable to Central Government Employees. It is reported that cost analysis has been called for by DOPT regading Helicopter flights in the Country.
As such Central Government Emplyees are allowed travel by various classes by road and Trains depending upon the posts held by them. In addition to Bus and Train Travel under LTC, Central Government Employees who are in receipt of Grade Pay of Rs. 5400 and above are entitled to travel by Air while availing Leave Travel Concession. In respect of certain specified destinations such as North East Regions (NER), Jammu and Kashmir, Andaman and Nicobar, Employees have been allowed to travel by Air from a specified place viz., from Kolkata in the case of LTC to NER.
The Economic Times reports as follows:
The government is discussing a proposal to allow its employees to claim leave travel concession for domestic helicopter flights, a move seen boosting the helicopter-ferrying business.
At present, central government employees can claim leave travel concession (LTC) only for using scheduled commercial airline flights, preferably Air India. According to a civil aviation ministry official, the Department of Personnel and Training (DoPT) had sought a cost analysis of helicopter rides in the country.
“We have sent our analysis to the DoPT on the cost of flying in a helicopter. They had asked for it since they plan to bring helicopter rides under the LTC scheme,” the official, who did not wish to be named, told ET. The helicopter industry has welcomed the proposal, which aims to extend the travel concession to some 3 million central government workers.
“It creates business for helicopter operators in the country. Currently, helicopter operations are available in areas that have difficult terrain and no other means of connectivity, as helicopter rides are expensive,” said Harsh Vardhan Sharma, treasurer at Business Aircraft Operators’ Association and owner of Himalayan Heli Services Ltd, a helicopter operator.
“The rides are expensive because there is less demand. A move like this would increase volumes that will bring down fares in the affordable category.” According to Sharma, helicopter fare for the Katra-Mata Vaishno Devi Shrine ride has come down by half mainly due to volumes.
“During peak season, helicopter operators ferry about 1,000 people a day that comes down to about 800 a day during non-peak season between Katra and Mata Vaishno Devi Shrine. This had led to a 50% fall in fares from its high fare days,” Sharma said.