Thiruvananthapuram, Feb 26 A fire today broke out in a godown belonging to a post office near the famous Sree Padmanabhaswamy Temple in Kerala's Thiruvananthapuram. The fire triggered panic in the area, a high-security zone in the city in view of its proximity to the shrine besides being a thickly populated area. 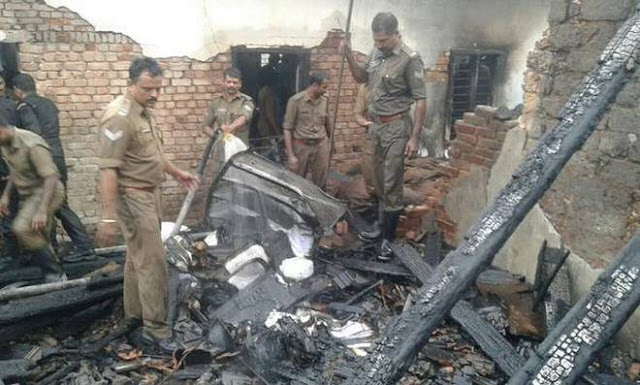 Old bags used by the postal department were stored in the godown. The godown was gutted while two other adjacent godowns suffered extensive damage in the fire, fire department sources said.
However, timely intervention of the fire force prevented a major incident as a petrol station was also located in the vicinity. The fire was stated to have broken out as a result of burning of waste in the area, fire force sources said.
The blaze was noticed at about 3.30 AM by locals who heard some tiles within the godown bursting. They informed the fire force which arrived immediately and brought the flames under control in three hours, the sources said.
"We immediately rushed to the spot on getting information and started fire fighting operations. A total of 15 fire tenders were used to control the fire," a fire official said.
Local residents said they saw flames rising several metres high. The place where the fire broke out is near the north gate of the famed temple.
State Devaswom Minister Kadakampalli Surendran said security measures in the area would be strengthened. He said most of the buildings situated in and around the temple were very old and the electric wiring was also old. People residing in these buildings have to do something about it, he added.
The Sree Padmanabhaswamy Temple is one of the oldest shrines in the state.